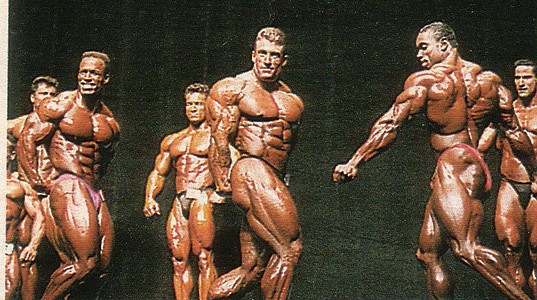 90’s Bodybuilding, was this ’the Golden Era’ of bodybuilding?

Personally we would say yes, it was.

Because the classic bodybuilding in the 1970’s and 80’s played a big part in the evolution of what we saw in the 90’s and what we see in present day bodybuilding is still a side effect of 90’s bodybuilding.

In the 70s and 80’s, Arnold Schwarzenegger more or less single handily took bodybuilding to the next level with regard to popularity and exposure, the film ‘Pumping Iron’ was a major influence to people and many took up bodybuilding after watching this.

What made 90’s bodybuilding so great?

The 90’s was a time when technology was evolving, the internet was growing and mobile phones were becoming a must have fashion accessory. This is also when bodybuilding was taken to a new level, what we were about to witness was what we consider the Golden Era of bodybuilding, which upon reflection is probably why bodybuilding and the fitness industry is so big today.

The 1990’s was when the new level of bodybuilding began which has set a precedent for what we see today. There have been many bodybuilders who have contributed to this, however, we feel one certain individual more than anybody else created this. That man is Dorian Yates.

In this article we take a look at the famous 4 bodybuilders of the 90’s, which also happen to be our favourite 4!

Dorian Andrew Mientjez Yates is an English former IFBB professional bodybuilder and 6 x Mr Olympia. Yates comes from Sutton Coldfield in the West Midlands and is famously known for training at Temple Gym in Birmingham, a gym which he himself owns.

In the 1980’s and 90’s Yates would train primarily in England and chose not to move to America as he didn’t want to mix with other competitors, he was content training ‘behind the scenes’ which we feel Yates knew and used this to his advantage. Don’t forget there was no social media back then, therefore competitors did not have regular shots all over the web of his progress, which in turn probably gave him the success he had in the sport as he was bringing a surprise package each time he competed.

Yates was nicknamed ‘the shadow’ basically this came from Yates turning up to competitions in America when sometimes others did not even know he was competing.  He would turn up to these shows and most of the time, win.

He is also widely regarded as the man what started the ‘mass’ era of bodybuilding.

His muscle thickness and size was far superior to what anybody had seen before, whilst at the same time maintaining superb conditioning.

His back in particular is not only widely regarded as the best back in 90’s bodybuilding, but one of the best backs the industry has ever seen.

The mass game continued well into the 2000’s with Ronnie Coleman and Jay Cutler, however many experts feel the 1990’s brought better conditioning and the competitors at the time were overall more aesthetically pleasing to the eye.

Once Yates was seen to be bringing something new to the stage others tried to match this and to be honest with you, we would not have wanted to be IFBB judges back in the 1990’s!

In our opinion the majority of those competitors, especially in the Mr Olympia’s, could have walked away victorious. We don’t feel this has ever been replicated in a line up since the 90’s.

Yates overall is our favorite bodybuilder from the 90’s basically because of the way he went about his business. He trained over in England, kept himself to himself, he wasn’t worried what others were doing and he still managed to dominate the best part of a decade in the golden era.

There were a few other notable bodybuilders who have never won the Mr Olympia (mainly due to Yates dominance) which we speak about below who in our opinion are some of the greatest physiques the world has ever seen. A shot of Yates show winning back in his prime, showing his dense, thick muscle.

Flex is widely regarded as the greatest bodybuilder never to win the Mr Olympia contest.

Flex was born in Frenso, California, his background was martial arts and for many years he would say marital arts was his primary focus with bodybuilding being second.

His great flexibility from his martial arts background is what earned him the nickname ‘Flex’.

Even today many athletes regard Flex as the greatest physique there has ever been. Fitness icons Steve Cook and Mike O’Hearn both stated this on a recent twitter post and people often reminisce of the package he brought to the stage.

During the 90’s bodybuilding era, Flex brought aesthetics with size to a completely new level…

His posing routines and overall appearance made many people wonder why he was never crowned Mr Olympia.

We feel Flex will probably be proud to be part of the 90’s bodybuilding golden era, however if he was competing in any other era we are sure he would have dominated it. His conditioning and genetics were what we would expect from a top men’s physique competitor, however he was in this shape at an absolutely massive 240+ lbs.

What Flex and most of the 90’s golden era bodybuilders brought to the stage was a small tight waistline with great abdominals.

Since the ‘mass’ game took off from the 90’s we somewhat feel that today’s bodybuilders are going for too much mass and perhaps this has gotten a little over balanced as now we see a lot of bloated mid sections.

Ronnie Coleman was once told to bring his waist in following an Olympia win, so he therefore wore a weight belt all year and tensed his abdominals for most of the day until the next Mr Olympia the following year!

A bloated mid section didn’t seem to be a problem during the 90’s and that was especially true for Flex. At the end of the day Flex would still be top 3 in the Mr Olympia at present day.

In our opinion Flex’s aesthetics makes the overall physique look just as good as somebody who is 20-30 lbs heavier with a bloated mid-section like we have seen a lot of since the 90’s. As Jay Cutler once said in his ‘Living Large’ series “it’s all an illusion” and no one created this illusion better than Flex. As you can see here, Flex has unbelievable symmetry and such a small waist for the size of his frame. His diet must have been on point!

Kevin Mark Levrone is a former Amercia IFBB professional bodybuilder, and much like Flex Lewis he was widely regarded as one of the greatest to never win the Mr Olympia title.

This was mainly again due to Dorian Yates dominance during the 90’s bodybuilding golden era, which shows how truly great he was.

Levrone won 23 professional shows which was a record until finally being surpassed by the great Ronnie Coleman in 2004 and he holds the record for the most Mr Olympia runner ups (4) without actually winning the competition itself.

One of Levrone’s inspirations to start training was after watching ‘Pumping Iron’ with Arnold Schwarzenegger and we think anybody who doesn’t want to go and lift after watching that isn’t normal!

Born in Baltimore, Maryland, Levrone was the youngest of six children. He had a country upbringing with a lot of property, pets and animals around and his family – the Levrones, were a close Italian family. Levrone started lifting as a child. Once he was completely amazed how big his cousin Stoney was when he came back from Marine Corps, and Levrone wanted to be just like him.

His older brothers Ray and Chris had a 110 pound weight sets in their bedroom, so he started lifting with them when he was 11. Levrone remembers that he was always stronger than anyone else, he was always good at lifting.

As he got older, he became well known for taking a very unorthodox approach to the way he trained, ironically this came about when sustaining a serious career threatening injury.

His routines would change forever!

After the 1992 Mr Olympia in February 1993, Levrone had completely torn his major and minor pectoralis while bench pressing 600 lbs, and he needed a surgery to reattach them. At that time everyone thought that Levrone’s career was over. Understandably, this time was very hard for Levrone…

He had 2 surgeries, the first one lasted 8 hours, while he was healing from first surgery he got an infection and he needed a second surgery. His weight dropped from 260 to 220 lbs. However he only had 8 weeks to gain the weight he lost for the Mr Olympia contest, miraculously he somehow achieved this and he took 5th spot in the competition.

Following this Levrone realised that he did not need to train year round and opted to workout for only approximately 4 months a year and save the other 8 months for doing other things with his life, quite unorthodox don’t you think?

Kevin still attends expos across the world now and despite being retired still looks in great shape. He is a strong believer of being in good health and it looks like he still adheres to this today. He also has his own range of products called Kevin Levrone Signature Series. As you can see here, Levrone had incredible shoulder development. His shoulders are regarded as the best the industry has ever seen, they really did look like two cannon balls!

Ray competed in three different decades before finally retiring at age 36 in 2001. Although one of the most frequent competitors in the Mr. Olympia show, the winner’s title eluded him for his entire career much the same scenario as Flex and Levrone.

Nevertheless, Ray was a Top 5 Mr Olympia Finalist for 12 Consecutive Years, a feat no other bodybuilder has duplicated.

Ray was born in Fullerton, California. During his three decades of competing, he competed in over 30 major bodybuilding competitions spanning across the 80’s, 90’s and 00’s.

He only placed below the top 5 on one occasion, a record.

However he could not take the crown of Mr Olympia, but nevertheless is still highly regarded as one of the greatest bodybuilders to have ever lived.

Ray got the nickname ‘giant killer’ as he actually beat almost every competitor he has faced in his career at some point. The only people he failed to beat were 8x Mr Olympia Lee Haney and 6x Mr Olympia Dorian Yates. Impressive for sure.

Ray is still heavily involved in bodybuilding after his retirement from competing. He has his own show, the ‘Shawn Ray Classic’. He has also been a master of ceremonies for the 2006 and 2007 Mr Olympia contests.

With the way bodybuilding was going in the 90’s when Dorian Yates came on the scene we feel Ray was unlucky not to have won a Mr Olympia show.

Unfortunately Ray was never much more than 210 lbs on stage, which began to show more and more with Yates and then Coleman bringing the whole new ‘mass’ game of 90’s bodybuilding to the table.

Ray shows us that he has fantastic genetics and his symmetry along with size made his physique one of the best in 90’s bodybuilding, if not one of the best there has ever been…

And we feel he maybe should have at least one Sandow sat in his home right now! As you can see here, his height only being 5 feet 7 inches, he was having to give up 40-50lb in weight to the likes of Dorian Yates and Ronnie Coleman.

Ray still held his own with his impressive physique and that is what makes him one of the greatest of all time, and definitely one of the best in 90’s bodybuilding.

Other noticeable mentions of great bodybuilders from the 90’s:

Where to Watch the 2016 Mr Olympia